A film series surveying the contemporary field of professional documentary with filmmakers present for Q&A. Co-presented by Northwestern’s MFA in Documentary Media program.

I AM NOT YOUR NEGRO

In 1979, James Baldwin wrote a letter to his literary agent describing his next project, “Remember This House.” The book was to be a revolutionary, personal account of the lives and assassinations of three of his close friends: Medgar Evers, Malcolm X and Martin Luther King, Jr. At the time of Baldwin’s death in 1987, he left behind only 30 completed pages of this manuscript. Filmmaker Raoul Peck envisions the book James Baldwin never finished.

Peck is is the School of Communication’s 2018 Hoffman Professor for Documentary Media, a short-term filmmaker residency.

(Joshua Bonnetta & JP Sniadecki) – Thursday, November 2nd – 7 PM
A portrait of the Sonoran Desert along the United States border with Mexico.  Professor JP Sniadecki in person to take questions after the screening. 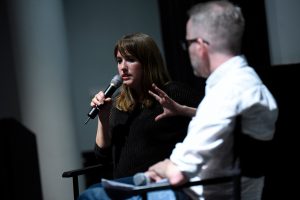 Kyle Henry’s (Interim Director of the MFA in Documentary Media), film ROGERS PARK will premiere Thursday, October 19th as part of this fall’s 53rd Chicago International Film Festival. The film was made with the support of a School of Communications Grant and included the help of many NU RTVF alumni, including Madison Ginsberg (Class of 2015) and Grace Hahn (Class of 2016).
https://www.chicagofilmfestival.com/film/rogers-park/

It was a packed house for all three nights of the MFA in Documentary Media Class of 2017 thesis screening series, NU Docs 2017.  The eleven thesis films were well received with each night culminating in a Q&A with the graduating filmmakers.  Many of these films have already begun successful film festival runs (see news below)!

In May, documentary filmmaker Kirsten Johnson met with the MFA in Documentary students to discuss her twenty-year career as a documentary cinematographer working on award winning documentaries such as CITIZENFOUR and FAHRENHEIT 9/11.  Johnson screened her newest documentary, CAMERAPERSON to a packed Block Cinema artist. Kirsten Johnson, is the 2017 Hoffman Professor for Documentary Media, a short-term filmmaker residency.

Iyabo Kwyana has joined the faculty of CalArts and her film HOLY CHICKEN (THE OFFERING) screened at Zanzibar International Film Festival this past summer.

Sebastian Pinzon’s thesis documentary PALENQUE had its World Premiere at Locarno Film Festival in Switzerland.  The film will have its US premiere at the Camden International Film Festival in Maine in September and it will be playing at Festival dei Popoli and Valdivia Film festival in Chile in October.

Hasan Demirtas’s thesis film CARRY MY VOICE was an Official Selection of the Duhok International Film Festival in the Kurdistan Region of Iraq.  It is the Middle Eastern Premiere of the film.
http://www.duhokiff.com/index.php/panorama/item/1130-carry-my-voice

João Queiroga‘s thesis film OUR SKIN was an official selection of Hot Docs Canadian International Documentary Festival.  The Toronto screening continued a successful film festival run for OUR SKIN including a US premiere at NewFest: The NYC LGBT Film Festival and a European premiere at Doclisboa’16 | Festas.

Class of 2016 graduate and NU Filmmaker in Residence Jesseca Ynez Simmons’s thesis documentary, EMERALD ICE has continued a successful festival run winning Best Experimental Under 40 min at Big Muddy Film Festival, winner of the Pablo Koontz Award for Best Experimental Technique at the Humboldt Int’l Film Fest‘s.  The film was a finalist for the ASC Vilmos Zsigmond Heritage Award, was nominated for Best Documentary Short and Best Cinematography and Cinematic Writing at the Black Bird Film Festival, and winner of the Best of Fest Student Award at the Vidlings & Tapeheads Film Festival. The film screened at the Chicago Underground Film Festival, and will screen at the Santa Cruz Film Festival and is shortlisted for Best Academic Film at Brazil’s 2017 MOVECINEARTE Film Festival in September.

Check out this review of EMERALD ICE that was picked up by, Poetry Foundation.org – https://www.poetryfoundation.org/harriet/2017/08/escape-into-life-reviews-new-diane-wakoski-docufantasy

More good news for Professor JP Sniadecki, in April Sniadecki was awarded a 2017 Guggenheim Fellowship. Sniadecki said he will use the grant to continue his work and research, adding he is currently working on a number of projects.

A huge congrats to Doc Media program director, Debra Tolchinsky, on being named an Alice Kaplan Institute for the Humanities 2017-2018 Faculty Fellow for her documentary, TRUE MEMORIES AND OTHER FALSEHOODS.
http://www.humanities.northwestern.edu/…/2017-2018-faculty-…